that's how it was done. 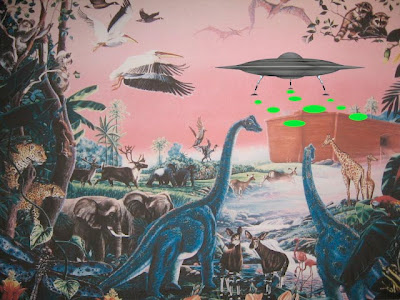 JESUS APPEARS TO THOUSANDS IN VENEZUELA-APPOLOGIZES

JESUS APPEARS TO THOUSANDS IN VENEZUELA-APPOLOGIZES

Thousands of people working in ’s capital city of witnessed a miracle as Jesus Christ descended from the clouds surrounded by a heavenly white mist and began asking for president Hugo Chavez.

“Excuse me, “ one excited woman heard him ask, “ Do you know where the president is?” Then after he noticed her trembling in fear he continued, “Don’t worry, I’m not American. As a matter of fact, that’s why I’m here. I just wanted to apologize for what I said through my Patsy Robertson. Uh, I was having a really bad day and I don’t know what came over me.” She says she pointed him towards the capital building.

A couple of boys interned in an israeli guarded palestinian "neighborhood" unearthed what religious scholors are calling the "Greatest Find In History"- A perfectly preserved scroll which turned out to be the original copy of the old testament. In Swahili! The various translation difficulties that have plagued translators throughout the ages are resolved. For example, many famous scholars have argued that Yohm can mean either "Era" or "day", chief among them is a man named Mr. Lando Calrissium who published a brilliant scholarly endeavor proving conclusively that it means "Era" in Genesis so we don't have to think that the earth is only 6000 years old. THis emmensely important work reconciled huge swaths of scientific investigation with the words of the Bible. Other important contributions have included his much more accurate translations of the flood story to show that it was definitely describing a local event and therefore also was not contradicting important scientific discoveries.

Imagine our surprise when we discovered that there were serious errors in the Hebrew translation. "All our work is bunk" lamented Lando. "After reading that disclaimer inside the front cover we were all feeling pretty foolish."

The scrolls had a sticker, stuck to the top of each scroll. The sticker, made of ultrafine lambskin and affixed with a clearish milkyish glue, read:

This scroll contains material on the chronology and events of creation. This information is not a fact regarding the origin of living things. This material should be approached with an open mind, studied carefully, and critically considered as the pure allegory for the human condition that it indeed is.

Approved By
Yamashukalevi, grand Archmage of the tribe of israel written in the language of the swahili, the language which brings the listener closer to this god that we are making up.
Thursday, March 28, 4021 BCE.

Lando is busy at work on his new translation of the Swahili where he will prove conclusively that aliens built the pyramids.
Posted by BWE at 5:42 PM 2 comments:

If science by definition, cannot posit the existence of a supernatural force, then science cannot be used to prove the absence of a supernatural force. For instance, if I determine a priori that no matter what I observe, I shall never observe X, I cannot then turn around and argue, "Ah ha! In all of my research I have never observed X, so I have now proven that X does not exist."

That's it. Case closed. Since creationisn and religion make no claims, science cannot refute those claims that were never made.

"We're gonna make darn sure that no one on our side of salvation ever claims anything." Remarked Dean Thoroughby of the anti-discovery institute. "If we just sit down and shut up, they're gonna have to do the same."

"They walk around so High and mighty saying that god didn't make the earth. Were they there? Huh?"
Posted by BWE at 4:31 PM 3 comments:

Atheism is a tool of the Pansy-Assed Liberals

(opinion)
those posting [to evolution sites] in support seem to be far left liberals, often times FRINGE in their liberal views. They also seem to be mainly composed of those who are militantly anti-religious/religion. Ulterior motives?

I whole-heartedly agree. Not just far left liberals but Pansy Assed Liberals who wouldn't get in front of a bullet to save mother teresa. Out there having sex with dogs and calling it "freedom to choose"! They wear the flag of cowardice and they hide behind atheism because if there is no god then no one could possibly say that what they do behind the closed doors of their houses is wrong. WRONG! But we know that they are smoking marijuana , Drinking french water and wine, blaspheming the name of the lord by hiding from their duty to god and country in the military, now when we need brave boys more than ever the liberal Pansy-asses trot out their flag of the nation of cowardsville and point to their athiest manefesto and say, there is no god! We don't have to go to war! ANd they use their atheism as a sheild claimin "respect" for arab lives. They go and cry sissy just because our mission, though accomplished for the most part, still has a few bumps to flatten out.