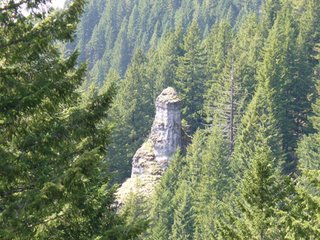 Judge Jones is taking Cues from Judge Dredd and whuppin on the darwin hating rat bastard mutherfockers on the christian-wingnut cousin-fuckin 3-toothed political righties. It pisses them off that they know how we all look down at them and laugh. It bothers them that we can feel pity for their kids but only contempt for them. And it bothers them that they are wrong
Posted by BWE at 11:26 PM 2 comments:

pandas thumb has an interesting post that is far too intellectual for this blog but worth a comment I think.

An interesting question. Consider for example, Uri Geller and Pat Robertson. Both make claims that defy explanation by the physical laws of the universe. And both are lying.
Posted by BWE at 6:24 PM 2 comments:

A man named Mr Christopher posted this at Antievolution

Although I was never a fundamentalist I was once a believer as well and Robert Ingersoll's writings did more to expedite my atheism than any other person or ideology. Ingersoll was my first glimpse into knowing there were in fact others who thought (and doubted) like myself.
Evolution had absolutely NOTHING to do with my decision to drop kick my faith. The creationists should be trying to ban Ingersoll and leave evolution alone :-)
For those unfamiliar -

Robert Ingersoll complete works
And...
Robert Ingersoll Wiki Pages
And I'll leave you with this Ingersoll quote:
"The man who invented the telescope found out more about heaven than the closed eyes of prayer ever discovered. "

I was fascinated with the reading and it got me to thinking, How many authors have really influenced my thoughts on religion. Granted, I never was a believer, coming from liberal academic parents who, like all good liberals, politely declined religious services, but I was interested since I was born with the God Gene and since we lived waaaaay out in the forested mountains in the North Cascades part of Washington State where god is all around.

William Blake gave me my first images to manipulate the concept of religion with The Marriage of Heaven and Hell. Wierd for a kid to read this but my dad was a history professor so that's the kind of stuff we had lying around. Next came Mark Twain's "Letters From the Earth". My all time favorite is the rant from philip wylie called "The Magic Animal".

I love Ken Wilbur's idea that spirit is what we are evolving toward and the 9 insights from the Celestine prophecy were especially illuminating for me when I read them.

Any way, after providing all these links (I have read both bibles, the book of mormon, the bhagavad gita and etc but they are alittle too political for me :), I wonder, what authors have affected your religious thought?
Posted by BWE at 1:36 PM 10 comments:

Bush is not HELPING.

If you follow this link, you will see an unlikely source of criticism for Bush's State of the Union adress,

Today, I feel compelled to bring you a few words of encouragement as you may need them if you choose to watch tonight's State of the Union Address by President George W. Bush.

Throughout yesterday and today I have heard snippets from the Bush cheerleaders in the managed media and in so-called "Christian and conservative" circles which seek to prepare you for the supposed "attack dogs" of the Left who will demonize our beloved conservative and Christian President. Thus is the stage set for the dismissal of all criticism of the speech as emanating from biased, left winged, hateful, Bush bashing liberal Democrats.

Such posturing, I think you see, is meant to convince you that the (two?) major parties are the only choices you have. This is what we have termed "Boogie Man Politics"! You are supposed to ignore the evidence which is so plainly before you that this President and the men who surround him have no intention of following the Constitution, defending America's sovereignty, securing America's borders, ending the national disgrace of abortion, limiting the size of government, or anything else that you are wishfully thinking they stand for.

Finally, Someone is Doing Something About It!

http://www.ChristianExodus.org is moving thousands of Christians to South Carolina to reestablish constitutionally limited government founded upon Christian principles. It is evident that the U.S. Constitution has been abandoned under our current federal system, and the efforts of Christian activism to restore our Godly republic have proven futile over the past three decades. The time has come for Christian Constitutionalists to protect our liberties in a State like South Carolina by interposing the State's sovereign authority retained under the 10th Amendment of the U.S. Constitution.

The foundations of the United States of America were laid upon these principles, that the rights of man are God-given and inviolate, that the sole purpose of government is to secure these rights, and that the only just powers of government are those specifically delegated by the people. The federal government is restrained by Constitutional Law, the Sovereign States, and the Citizens of those States, each one made in the image of God, with individual rights to life, liberty, and property.

The federal government was created to protect us from the very tyranny it now practices against us...

This is not a drill. True Christians are encouraged to follow.
Posted by BWE at 11:09 AM No comments:

Go for it. This is the kind of crap they come up with.

Have a field day with this one. I haven't been getting too many comments lately so I figured I'd plop this one in.


California - The issue of Intelligent Design (ID) has come so closer to the human heart now that it has never been before. The main reason is that the verdict given by a Judge in America against the use of ID looks to have given a blanket power to the followers of Darwin’s theory of Man’s evolution.

“ The scientists recent finding on the chimp that it has stunning similarities with man having a difference of 3 to 4% in DNA test has revived the controversy. It has not only made it live but also set a proper battle to be fought between the champions of ID and supporters of Darwin’s theory of Man’s evolution.

Dr. Raj Baldev, Cosmo Theorist from India, the head of SAROUL (Scientific Advance Research of Universe and Life) is quite confident that the discipline of ID is a scientific reality. He said, “It is the strongest of the strongest, and I want all the champions of Intelligent Design (ID) to come on one platform to counter them with a proper argument so as to save the people from being misled by Darwinism.

Dr. Raj Baldev said, “If the Supporters of the ID take it light and let the eminence and usefulness of ID overlooked or neglected, it can surely affect our lives. It may lead to a state of in-discipline in our moral and spiritual life all over the world and may deteriorate the moral standard of all the coming generations.

Can someone out there give me a good reason to believe the tenets of a religion? I don't care if I go to hell so please use another one. Or what do you think? Is god a being equipped with emotions? How do we know? Is your holy book really the word of god? How do you know? If you know because your parents ar another human told you then don't you think that's a little suspect? Tell me a little bit about god then tell me how you know. If you do that I will return the favor. I do know a little something about god and I'll show you mine if you show me yours.
Posted by BWE at 2:10 PM 1 comment: